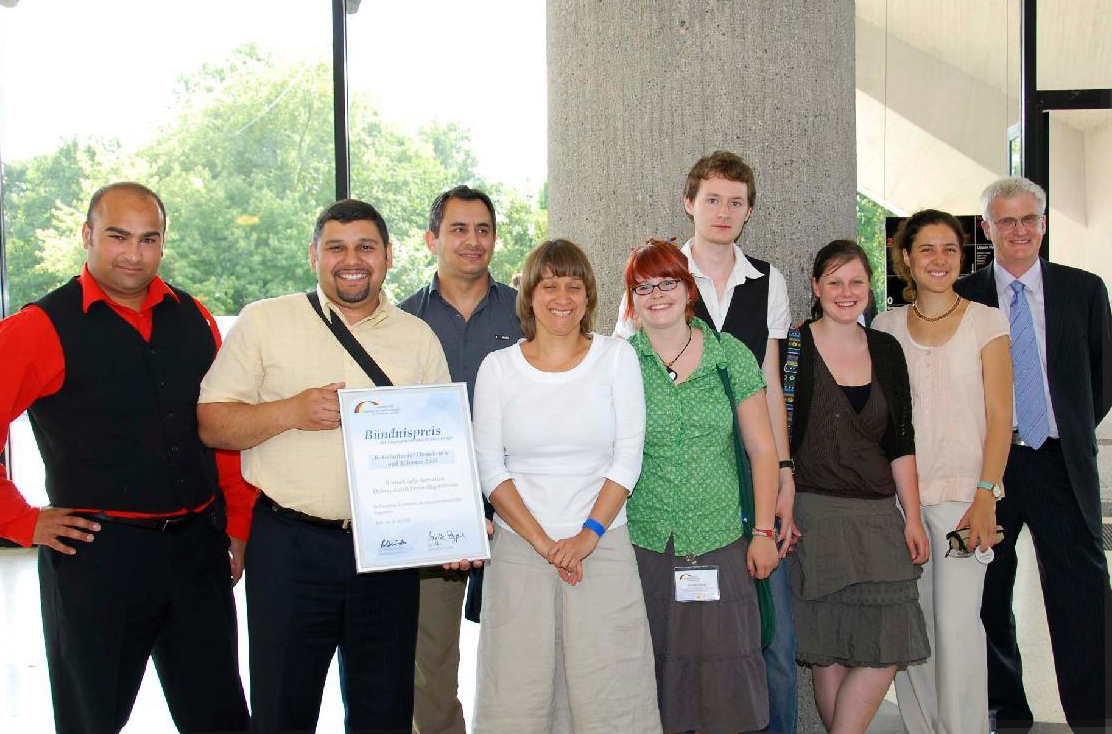 The Roma-Gadje Dialogue through Service Initiative began in September 2000, when five organizations involved in the Ecumenical Diaconal Year Network (EDYN) began placing young adult volunteers in projects with Roma minorities in the Transcarpathian region of Ukraine. Over the next 3 years, Roma and non-Roma volunteers from Central & Eastern Europe, Western Europe, and North America served in projects including kindergartens and preschools. They were funded by church-related donor organizations and by the volunteers themselves.

The Roma-Gadje Dialogue through Service Initiative was founded, and for over 10 years, coordinated by John Stringham.

In 2003, the first European Voluntary Service (EVS) approved project of RGDTS was established in Hungary. In that year the first bi-annual seminar supporting RGDTS volunteers was held. The initiative expanded to include volunteers from Romania hosted in a placement in Italy.

In 2004, new partner organizations from Germany joined the initiative, and placement sites were expanded to include the Czech Republic, Romania, Slovakia, Russia, and the Netherlands.

In 2005, volunteers served in a variety of placements in Czech Republic, Germany, Hungary, Romania, Russia, Ukraine, and USA. Partner organizations worked intensively during the year to prepare two central applications to the European Commission; Youth in Action programme to expand the initiative both in numbers of volunteers and range of activities. This was approved in July 2006.

From 2007 to 2009, another EVS central grant funded further placements. 18 organisations in 11 countries were involved. During this period short-term volunteering placements were included, especially in Italy, France and Wales.

From 2000 to 2010, RGDTS existed as an informal network. In the fall of 2010 RGDTS was legally organized in Hungary as “RGDTS Non-profit Kft. for Public Benefit” with the coordination office located in Budapest. The 10+ year history of the RGDTS initiative featured support, energy and dedication from a wide variety of organizations from across the world, reflecting a common motivation to support social change through voluntary service.

In the fall of 2011, with new members of the coordination team, efforts began to formalize the international network under a new, Romani name: Phiren Amenca. A new mission, vision, and comprehensive strategy for 2012-2014 was developed, based on core values of mutual cooperation between Roma and non-Roma organizations. The strategy, with its 3-year action plan, focused on quality development of member organizations and a strengthening a support system for our international volunteers, Roma and non-Roma alike. RGDTS continued as a Hungarian member organization of the network. In 2014 at its General Assembly, the formal network grew from ten to seventeen organizations from across Europe—many of them being Romani youth organizations.

Phiren Amenca continues to grow with the coordination team in Budapest including increased involvement of interns and volunteers, short-term opportunities for volunteerism as well as long term service in more countries, and a growing emphasis on quality study sessions and activities devoted to challenging stereotypes and racism.