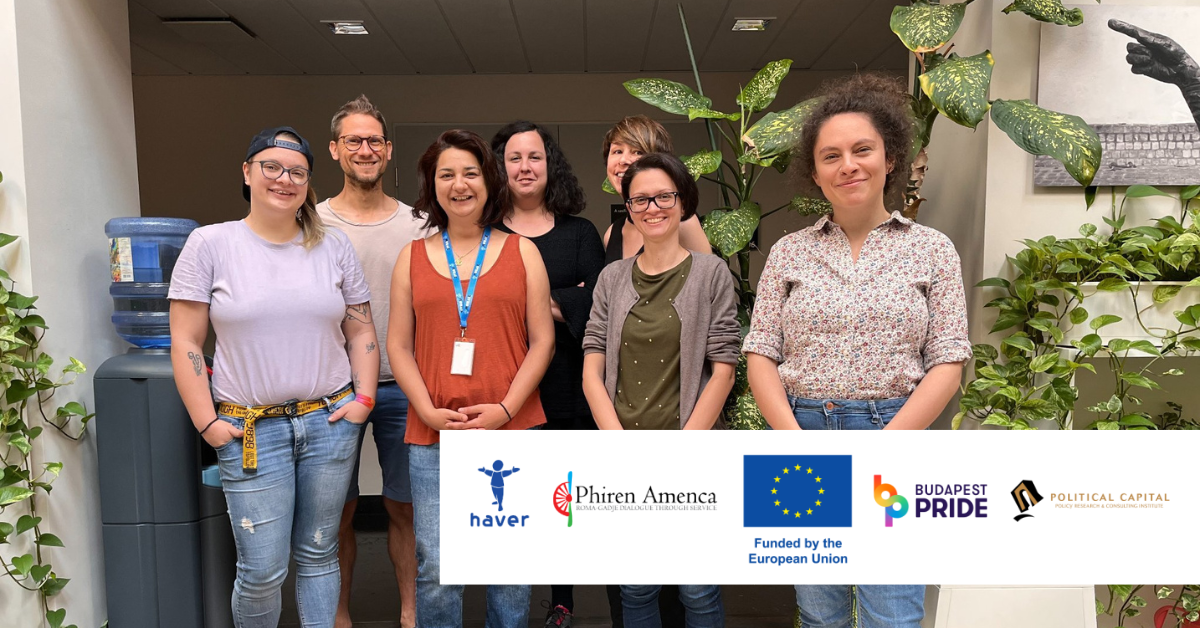 A preparatory meeting was held in January, 2022 where besides the participating organisations – RGDTS Nonprofit Kft (Coordinator), Rainbow Mission Foundation, Political Capital, and Haver Foundation – other CSOs, public bodies and experts – National Democratic Institute Hungary, Boros Gerzson AI expert, Ágnes Zentai Hate Speech lawyer, Háttér Society, Romaversitas Foundation, Secretariat of the Minority Ombudsperson, Dr. Katalin Baracsi Internet Lawyer –had a thorough discussion about technical considerations of the online monitoring and data scraping; the limits and the potentials of online data collection; the national legislation of hate speech and its enforcement; and best practices of public awareness-raising on the topic. Therefore, all parties were well informed and already had a good level of understanding about the project and the activities in the contracting phase, and the organization of a kick-off meeting was smooth.

During the forst kick-off meeting, held on the premises of the Haver Foundation on the 5th of May, the following topics were addressed:

This meeting helped all partners to be on the same page, and have a thorough understanding of their roles and tasks, and could prepare for a next, more in-depth meeting to create detailed timeline with specific responsibilities along with a communication strategy and template documents for a consistent reporting and outreach.

The second meeting was held on the 25th of May, again in the office of Haver Foundation and this time the partners got into details under each work  package(WP)e in terms of timing, tasks and responsibilities.

Under WP1 (Coordination) we discussed that an online folder will be created where all relevant documents will be uploaded by all partners, and that RGDTS shares a protocol for naming files and documents, numbering contracts, and keeping records. Templates for agreements, visibility documents and files (such as logos, disclaimers, etc.) and participants lists will also be standardized and shared in the cloud. In terms of visibility and communication we agreed to hold a separate meeting during the summer in order to agree on vocabulary, hashtags and a social media calendar.

About WP2 (Monitoring), partners created a list of words and expressions for the AI to use for scraping data and compiled a list of social media pages, blogs and websites to be monitored, which was sent to the monitoring company. For the 2nd of June, an online meeting with the monitoring company was scheduled in order to discuss the technical details and the timeline of the process. We also agreed on a training for consortium members and volunteers, who will take part in the online monitoring process, to be held on the 21st of June in Budapest with the participation of experts and trainers.

Partners also discussed the tasks and the next steps towards the creation and dissemination of counternarratives within WP4, and that all our public communications should be in line with that future campaign.

For WP 5 (Advocacy), the team started to put together a list of relevant Hungarian and international experts, organisations and institutions to be invited to the international advocacy working group.

The meeting was closed with a common lunch and taking the fists group picture of the project team.

The „CHAD – Countering Hate Speech and Hurtful Speech against Diversity: Roma, LGBTIQ, Jewish and Migrant Communities” project (project nr. 101049309) is funded by the Citizens, Equality, Rights and Values Programme (CERV) of the DG Justice, European Commission and coordinated by RGDTS Nonprofit Llc. in partnership with Haver Informal Educational Foundation, Rainbow Mission Foundation and Political Capital. Views and opinions expressed are however those of the author(s) only and do not necessarily reflect those of the European Union or the Citizens, Equality, Rights and Values Programme. Neither the European Union nor the granting authority can be held responsible for them.