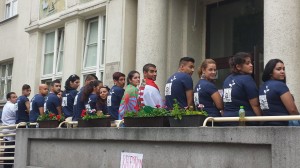 Phiren Amenca was actively involved in the Roma Genocide Remembrance Initiative 2014 organized by ternYpe – International Roma Youth Network. ternYpe and its partners, including Phiren Amenca have held Europe’s biggest series of events marking the 70th anniversary of the Roma Holocaust in Krakow and Auschwitz-Birkenau, Poland. One thousand young Roma and non-Roma from 20 European countries and representing about 50 Roma and non-Roma organisations, participated in the five-day series of events. Over 70 workshops took place on July 31st through August 4th to learn about the Roma Genocide, to meet with survivors and to learn and discuss about human rights, antigypsyism, and empowerment strategies. Volunteers and staff members from Phiren Amenca lead drama workshops, shared creative non-formal methods, and organized a living library. They also had a Phiren Amenca Cafe during the entire event to promote voluntary service and motivate youth activists and youth organizations to get interested in international voluntary services.

Besides the workshops the week-long event included lectures, conferences and concerts. From Hungary, organized by Phiren Amenca, 120 secondary school students and young people active in civil society organisations and a Roma Holocaust survivor participated in the events. Romano Glaso, a Hungarian folk group also joined the group of Phiren Amenca. The band had concerts and a performance in the Galicia Jewish Museum where they performed their Holocaust Ballad, “The girl who was danced to death.”

On the 2nd of August the 1.000 young people commemorated the victims of the Roma Genocide and have had a wreath-laying ceremony at the memorial site of the former Auschwitz-Birkenau Nazi death-camp. ternYpe and coordinators of the member organisations issued a joint statement stating: “We are the last generation that still has genuine links with survivors of the Holocaust and it is our duty to preserve and pass on the memory of the horror to posterity.” With this statement we would like to share our mission to work further on the Roma Genocide remembrance and to motivate our youth and volunteers to join us during this work.

On the 29th of July, Phiren Amenca invited the 120 Hungarian participants of the international Roma Genocide Remembrance event to Budapest for a preparatory seminar. Our aim was to give an introduction to the topic and get to know each other before we went to Krakow. We involved 10 Roma and non-Roma volunteers in creating the educational program of this seminar and facilitating the activities. We had team building games, non-formal educational activities about the Roma Genocide, testimonies about the 2nd of August and the Roma Resistance Day. The participants had the possibility to meet and have a discussion with a Roma Holocaust survivor in Budapest who came with us to the international event as well. After the international event we plan to bring the group together again to develop our future activities, to discuss common plans and to involve the participants as well in our long-term vision and to develop educational strategies about the Roma Genocide Remembrance in Hungary.

The Roma Genocide Remembrance Initiative took place under the auspices of the Secretary General of the Council of Europe, Mr Thorbjørn Jagland and the Honorary Patronage of the President of the European Parliament, Mr. Martin Schulz.

The project was supported by the International Holocaust Remembrance Alliance, the Youth Department of the Council of Europe, the Europe for Citizens Programme of the European Commission, the Foundation for Polish-German Cooperation, and the Ministry of Administration and Digitalization of the Republic of Poland. The Phiren Amenca group was supported by Renovabis, the local and national partner organisations and private donations.