HomeUncategorized Volunteering for Roma Participation “I don’t want anyone else to decide instead of me” – Interview with Melinda Orsós, Legal Assistant at Szent Márton Caritas Foundation[EN]

“I don’t want anyone else to decide instead of me” – Interview with Melinda Orsós, Legal Assistant at Szent Márton Caritas Foundation[EN] 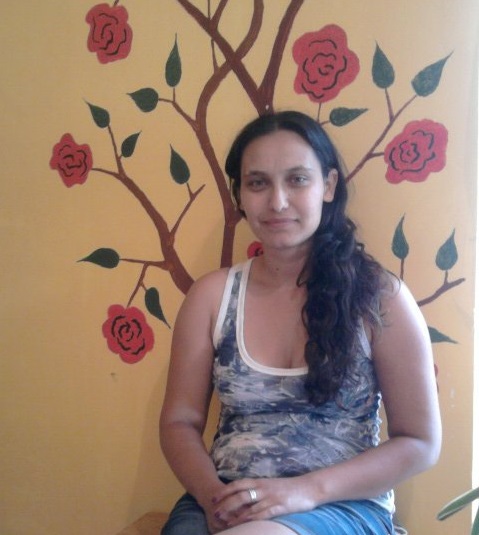 Orsolya Szabó: Could you introduce yourself shortly?

Melinda Orsós: I am Melinda Orsós, I grew up here in Gilvánfa, nearby the afterschool center (“Tanoda”). At the moment I am a mentor at Fészek Tanoda and a Legal Assistant at Szent Márton Caritas Foundation. I used to live in Pécs but now I moved back home again to my family.

O.Sz.: Please tell me about your school years. What kind of schools did you go to and how did you feel back then?

M.O.: I went to elementary school in Gilvánfa until the 4th grade. Only the local children go to this school and 99.9% of the inhabitants here are Beas Roma[1], so we can say that it is a segregated place. At the 5th grade we went to another school in the nearby village, Magyarmecske and in that school there were some non-Roma, but hardly. I went to the “Ötszázas” high school in Pécs. There I was often teased by some classmates because I am a Roma. Actually most of them were Roma but they did not look like that, so they could hide it and tease me. During my first three years in Pécs I only stayed in the city until I really had to. I left in the morning at 6:30 and came back immediately after my last class. Even if I had an hour until the bus, I was just rather waiting at the station.  I did not want to stay in Pécs because it is a big city, there are many people and you can hear terrible things on the streets. There is writing on one of the walls: “gypsies, go home”. These things were too much for me. We don’t go into the town from here only if it is really necessary. Especially if you don’t have money, you don’t want to hang out in the city, or at least I don’t.

O.Sz.: What kind of environment are you coming from? How traditional your family is?

O.M.:  I am the middle child, I have 3 older and 3 younger siblings. So it was quite difficult for my parents to raise seven children especially because one of them just left and moved away. Most of my siblings only finished elementary school, or not even that and they have children already.

O.Sz.: What motivated you to move away from your home and to continue to study?

O.M.: It’s funny, but exactly because of my family. I did not want and I do not want a life like my sisters or my mother. Not because they are housewives, but because of the other things. “How do I make ends meet to have enough for seven children? How will it be tomorrow and the day after?” I don’t want to be so concerned about financial issues. I don’t want to worry how my children will have this or that.

O.Sz.: What did you do after high school? How did you get into higher education?

O.M.: I graduated as a stenographer from the vocational school in Pécs and because of the urge of Peter Heindl I applied to a higher-level vocational training to the department of Office Management and Legal Assistant. I finished this school and I already miss studying. While I was attending this school I got accepted to the Wlislocki Szakkollégium (boarding school) and I really enjoyed that as well. There were regular meetings for the students, once a month we spent a long weekend together and we constantly had to report about our work. We also conducted a research about the history of Gilvánfa. When we printed the research and I saw my name in the book I was so proud of myself. I really enjoyed the boarding school. It was good to realize that there are other young Roma people of my age with whom I can work together and I can talk about things. Because after a while I wasn’t able to talk about my studies with my family or friends from home.

O.Sz.: How did you handle the everyday issues and how did you find a flat when you first moved to Pécs from your village?

M.O.: Well, when I first wanted to move to Pécs I had started to look for flats a couple of months earlier. I called many people, I introduced myself and explained that I am going to work in Pécs soon and therefore I would like to move there. But the answer was always that “this flat is already rented out”. September came, I had to start working and I did not manage to find a flat by then. So, I moved into the dormitory of Gandhi high school because the headmaster allowed me to. In the end I lived in this dormitory for 3 months because I just couldn’t find a flat. I was so hopeless that I wrote to a real estate agent that I am interested in a flat. Well, my name is in my email address so my ethnic background is quite obvious from that already. The agent replied that “we do not rent flats for gypsies”. And then I answered “thank you very much for the information”. Then I thought, I am never going to ask for help from a real estate agent.

O.Sz.: Did you do anything about this? Did you report this person?

M.O.: No, I didn’t do anything about it. I had already thought that the problem was that I said my full name on the phone. Peter kept telling me that we need to report her but I said no way. I am not going to fight with stupid people. I didn’t do anything about it because I had to find a flat and that’s all I was thinking about, I didn’t have capacity for anything else. Sometimes when I think back about it, it makes me feel bad that I didn’t do anything after that. But eventually I found a guy named György Orsós, who posted that he was looking for a flatmate, so I wrote to him that I am looking for a room. The flat was really ran-down and smelly, but I moved in. I hated that place, I hated going home. But in the end one of my friends from the boarding school told me that his room would become free, so I immediately decided to move there. And this flat is great. But in general, flat-searching is a disaster.

O.Sz.: Did you feel better in Pécs after this, that you found a nice flat?

M.O.: Pécs is still a strange place for me. I have never been going out and I still don’t dare to, I rather don’t risk it. I heard it from so many Roma friends of mine that they were not allowed to enter into places. Anyway, even in the shops, every time I go into one, the security would start following me. So, I rather just avoid these kind of situations as much as I can.

O.Sz.: It’s interesting that part of your job is to stand up for others, to protect their rights, but it is difficult to do the same for yourself. Also at UCCU Foundation, you fight against stereotypical thinking.

M.O.: Yes, we always tell these kind of stories to the children and they are just staring at us, shocked. I always ask the children in the beginning “what comes to your mind when you hear the word gypsy”? The answer is that they are dirty, loud, don’t dress as they should, and so on. And then I look at myself and ask them, “am I not dressed as I should”? And then they always say that okay, “but you are an exception”. I really don’t like these kind of sentences. No, I am not an exception, I came from the same situation, from the same background as other Roma, I have 6 siblings, and so on.

O.Sz.: Why do you do this kind of work? What does volunteering mean for you?

M.O.: In the beginning it was just leisure time activity for me. When we had nothing to do at home anymore because we finished with cleaning-up and washing, then I was always here in the Tanoda (afterschool center). So I wouldn’t have to sit at home and do nothing. Then volunteering was obligatory at the boarding school and I started to volunteer in another community center.

O.Sz.: And where did you volunteer besides this?

M.O.: While I was living at home, nowhere. To go somewhere only to work for free…especially if the word “for free” is in the description, then everybody is just outraged. Working for free? My own parents were criticizing me as well when I started to volunteer at UCCU. It is difficult to explain them the significance of volunteering.

O.Sz.: And when they ask you why are you doing these things for free, what do you say to that?

M.O.: Because I enjoy it. Because I can be with others, especially those with whom I can talk about things. Maybe I don’t agree with them always but at least it is not boring, at least I can argue with them. Those things that are not related to here, to Gilvánfa, I am not able to discuss with anyone here.

O.Sz.: Why do you think it is more difficult to engage Roma young people in voluntary service programs or workshops?

M.O.: Maybe I also wouldn’t like to go to a workshop. I would always be afraid that I don’t fit into that kind of environment and that I don’t know enough. What if I am still living in a bubble even though I moved from home? There are so many things I don’t know about and I don’t want to say stupid things. Maybe it would help if more people from my community came. I wouldn’t say it’s entirely true, but it is kind of true that Roma people feel good only among each other.

O.Sz.: What do you think about political participation? Are people care about it here?

M.O.: When I think about political participation, on the one hand I think about our terrible city council. Not only the one here, but the entire Roma Self-Government in Hungary. On the other hand, citizens do not participate at all and do not even know what they should do. For me, political participation is important because I don’t want anyone else to decide instead of me. I want to vote in every referenda, and I think more issues should be decided by referendum. But here, everybody voted for the current governing party. Representatives came here and gave them some food and drinks and that’s it, they bought the votes of everyone in these villages. People don’t understand that politics is more complicated than getting a free meal.

[1] one of the mayor Roma groups of Hungary