Interview with Ismael Cortés: Member of the Spanish Parliament 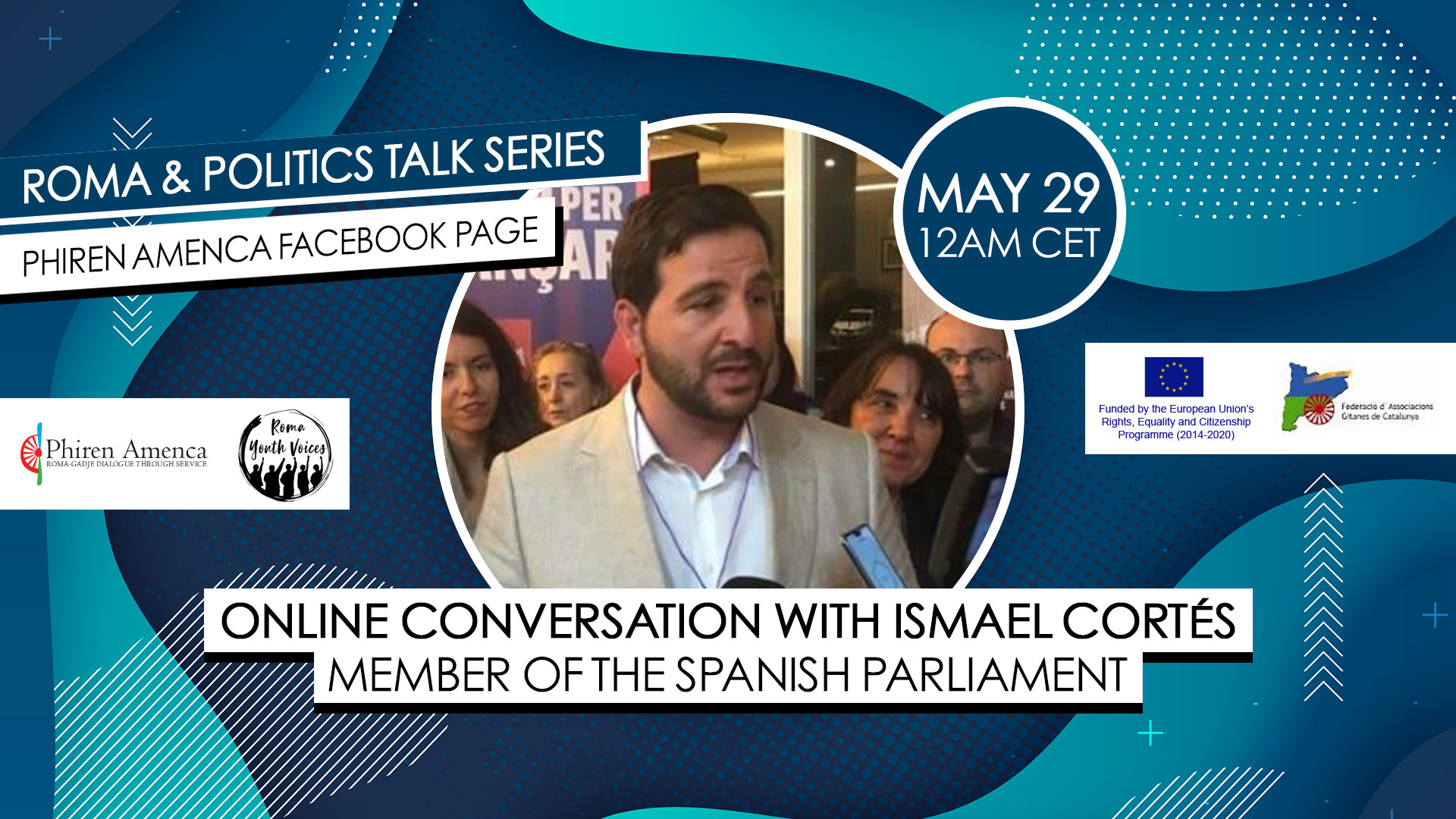 Ismael Cortés is a Spanish politician, a Congressman of the Spanish Parliament. He studied classical Spanish literature, cultural anthropology and philosophy at the University of Granada. He obtained his PhD from the Interuniversity Institute of Social Development and Peace at the Universitat Jaume I. He was a visiting researcher at the School of Critical Theory at the University of Nottingham and the UNESCO Chair of Philosophy for Peace. Between 2017 and 2018 he worked as a policy analyst at the Open Society Foundations in Brussels. Between 2018 and 2019 he was a postdoctoral researcher at the Romani Studies Program – Central European University. In April 2019, Ismael was elected MP as a deputy of the Unidas Podemos  – En Comú Podem party for the province of Tarragona, then again in the November elections.

Phiren Amenca International Network held a live interview with Ismael Cortés on the 29th of April, 2020 within the framework of the Roma Youth Voices project’s “Roma and Politics Talk Series”. Anna Carballo of FAGiC (Federation of Roma Associations in Catalonia) asked him about his work as a Roma politician in a world where there are only few Roma representatives in politics and decision-making.

Anna Carballo: Do you think your political party contacted you because you are Roma or because they were looking for a person with your profile?

Ismael Cortés.: As I have said many times before, you not only need previous contacts with the political party and the broader political life, but also previous experience and expertise on different fields. Politics is not only about one topic, but it’s mostly a holistic view on society. I’m not really sure to what extent the fact that I am Roma myself was key for the decision of my political party to contact me and to propose me to run for elections. Especially because I was leading an electoral list in a particular district. And in some cases, Roma votes don’t have that much weight on the balance in order to get elected. So I think, of course, my party and other parties in Spain increasingly value the fact of diversity in society, including ethnic minorities; and yet I think you need much more experience to get into politics and to lead an electoral list.

A.C.: What do you think, can we talk about real Roma representation in Spain, and in Europe?

I.C.: The issue of representation is much more complex than we think. I explained it in different papers. There is no one particular space for Roma representation, there is a democratic space for political representation and different subjectivities, different profiles have to find a way to get in. And this is through political parties. There is no structure where only Roma persons can go and be elected democratically, and from there to have decisions on big social topics. So that’s out of question. It’s the same if we think about other minorities, let’s think about sexual minorities, LGBT movement. They don’t have a concrete political space where they can go and get elected, but you have LGBT profiles that get into different parties and from there, they can defend their own rights. I think with ethnic minorities it should be the same. We have to be able to mainstream our topics in mainstream political issues, and there we can claim our right. So we have to make sure that we are not left out.

I.C.: I think for the majority of Western societies it is not even possible to have a purely ethnic political party. I haven’t seen that anywhere. Of course, in countries in Eastern Europe it is a bit different. In Western European societies, you will find big political parties and there you have like a mosaic composition. You have different subjectivities that try to harmonize their demands, and from there to attract the voters. In Spain a purely ethnic political party wouldn’t be even possible for minorities. One thing is the legislation. If you have less than 5% of the vote, you cannot have a seat in the parliament. So this is one issue. The second issue is that we have to think that Roma people, or any other minority, they are not a homogeneous group. So not all the Roma people have the same ideas. For example, many Roma people didn’t vote for me. Indeed they voted for other political parties. So, we have to start to think about political participation in terms of democratic rights and participation in the broader political scene; and not to think only in the compartmentalization of political identities because this is going to lead nowhere.

A.C.: I think this is a very important point about representation: Roma population is a little percentage of society and it’s very difficult to reach the Spanish parliament. (Especially in the case of Spain!). Something that is very interesting: you are Roma, you are a politician but you are representing a party. Not only Roma people, but you are representing the Spanish society as a whole, Roma and non-Roma, and also representing other minorities. Is it a strong point for you like a person, a Roma person – representing and also governing for non-Roma? What is the impact of all this on you?

I.C.: I think this is part of the normalisation of the participation of different groups in political life. It’s not only with Roma, as I said before, there are also other minorities who are participating in political parties and even in the government. And they are working for the sake of society as a whole – yes, to improve the life of majority society by including different minorities. In my case, for example, I am working within the committee of Home Affairs, within the Committee of Social Affairs, and also within the Committee of Sustainable Development Goals. So, you can see how there are many different directions through which I can align my work. And in the end, who are going to benefit are my Roma fellows but also my non-Roma fellows. Especially, if you want to run for elections, you have to convince the whole society as such. In my case, when I did my campaign, I talked very little about Roma issues, because I knew that if people will vote me, they will vote for me for agricultural issues, labour market issues, artificial intelligence, the construction of ports and airports and so on… a wide range of topics that do not focus exclusively on Roma problems. Now, the question is that me being in all these different fields of work within the parliament, I can make sure that Roma issues are there when we talk about all these and even other topics: when we talk about housing, when we talk about hate crimes, when we talk about prisons, when we talk about the Sustainable Development Goals. So, in all the different fields, I can make sure that Roma are there. And also, what is more important, I can influence my non-Roma colleagues (MPs) and make sure that they don’t forget about the Roma when they work on any issue.

A.C.: I’m going to ask you a last question before we give the floor to our viewers: What is your message or suggestion for young people? Is it important to get engaged in decision making? What would you tell to young people? I think you are becoming a reference to many young people, as we know the new generation has a strong will – will you make any suggestions to them?

I.C.: My first suggestion or advice, if I may, would be that young people have to follow their passion. They don’t have to follow politics if they are not interested in it. Yes, politics is one option, as I said politics is a very broad topic. There is a huge scope for work in politics. You can work through art; you can work through academia; you can work through media; you can even relate sports and politics; you can work on peace-making. So, there are many, many ways where you can participate in political life. And in the end, politics is the art to connect with different people and work for the good of everyone without letting out anyone. Of course this is the ideal horizon. Talking about decision-making, again, there are different choices; there are different ways in which you can participate in politics. One way is to institutionalise politics: go for the City Council, regional government, national government, European government and so on… But then you can also participate in civil society. You can also work in your neighbourhood, making sure that all what your people need is satisfied. When we talk about politics, we have to acknowledge that, whether you like it or not, politics is affecting every sphere and dimension of our lives. We cannot escape from politics. So, at least, I would suggest to people to keep an eye on politics, although it’s not necessarily to dedicate your entire life to it.

A.C.: Thank you, Ismael; we are collecting questions from the audience.

You can find the full video-interview, including the Q&A with the audience, here.