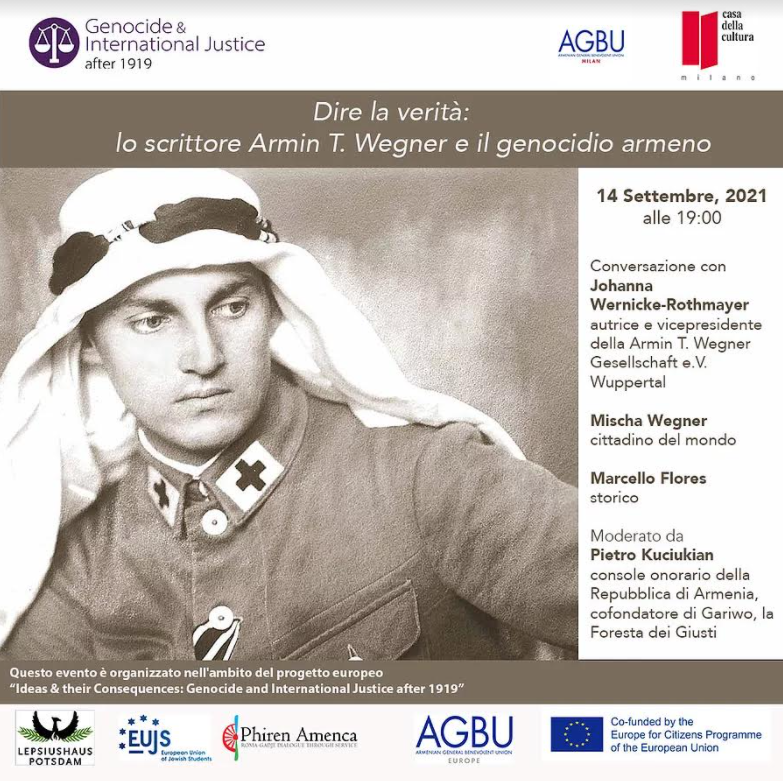 Another dissemination event of the project “Ideas & their Consequences: Genocide and International Justice after 1919” took place in Milan, Italy on 14 September 2021. The event was carried out by AGBU Europe in partnership with Phiren Amenca, the Lepsiushaus in Potsdam, and EUJS with the support of the Europe for Citizens Programme of the European Union.

A panel of guest speakers from Germany and Italy gathered in Milan on September 14 to discuss the figure of Armin T. Wegner, German writer and eyewitness of the Armenian genocide in 1915-1916, during a conv   ersation entitled “Telling the Truth: Writer Armin T. Wegner and the Armenian Genocide”.

Moderated by Pietro Kuciukian, honorary council of the Republic of Armenia, the event was attended by a local public in Milan as well as by international followers online. Renown Italian historian Marcello Flores put forward the importance and the relevance of the theme of the evening – telling the truth. He described the progress made in the last 30 years in the field of historical research on the topic of the Armenian genocide and on the growing access to trustful sources of information. Flores also added that in terms of visual archives, Wegner’s photographs are considered the most important images of the genocide, along with those taken by the American and German consuls.

Wegner paid a high price for telling the truth and for his commitment to justice and human values. He was profoundly disturbed by the torture he endured in Germany following his personal letter to Hitler in 1933, in which he denounced the first persecution campaign against the Jews. Forced to exile, he lost his roots and, as mentioned by his son Mischa Wegner during the conversation, Wegner suffered from this loss for the rest of his life.

This uprooting may have helped him understand even better the plight of the Armenians which preoccupied him all through his life. He may not have finished the great epic novel about the Armenians on which he worked for years, but his legacy as a human being guided by his profound commitment to tell the truth and to defend justice and human dignity remains remarkable.

To watch the video recording of the event in Italian, please click HERE.

To learn more about the project and upcoming events, please visit: https://www.genocideandjusticeafter1919.com/