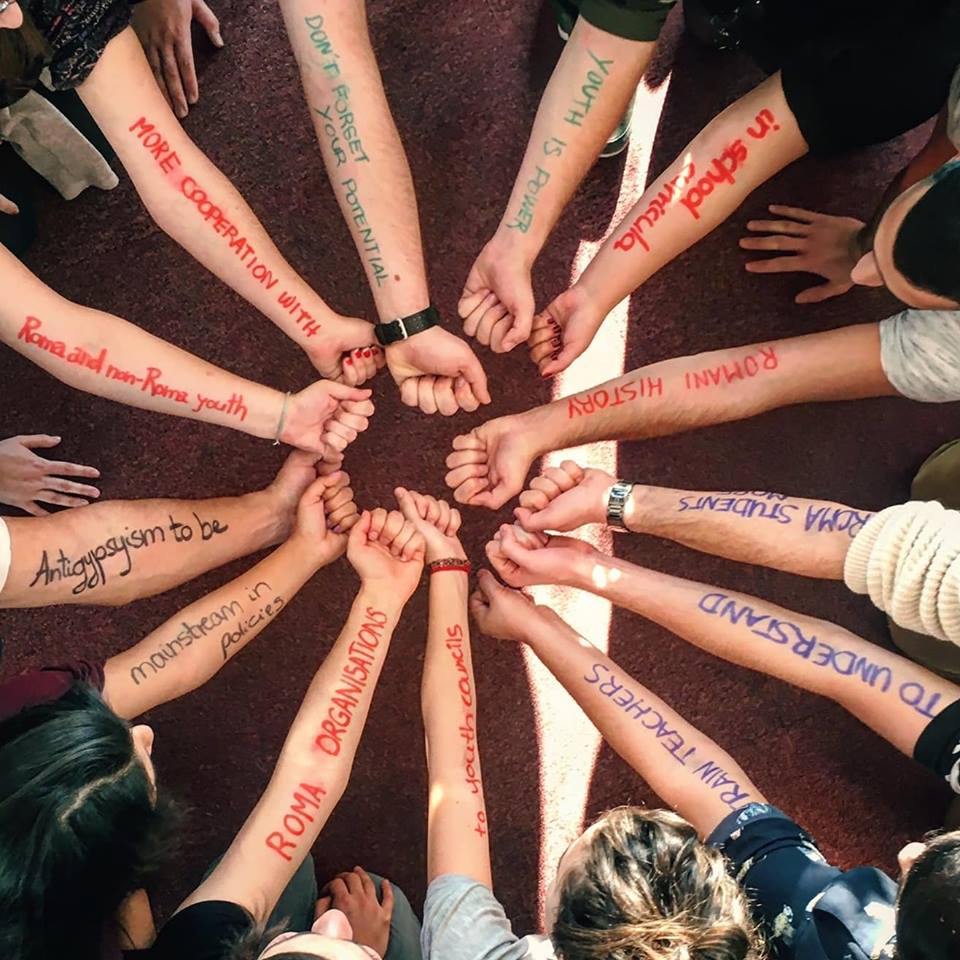 The conference was part of a one-week seminar that run from 9 to 14 December, supported by the European Youth Foundation, with the participation of 35 young Roma and non-Roma young people from all over Europe. It was built on the results of “A synthesis report on implementation of national Roma integration strategies”, which has been prepared as part of the Roma Civil Monitor pilot project with the coordination of the Central European University. The Roma Civil Monitor project has been implemented with the active participation of around 90 NGOs from 27 member states between 2017 and 2020.

The aim of the conference was to evaluate the National Roma Integration Strategies from a youth perspective. In addition to presenting the recommendations of the participants, experts and panelists highlighted the process and the outcomes of the monitoring of the strategies, the involvement of civil society organizations in that process, and discussed about the importance of the recognition of antigypsyism, which has to be included in all related policy documents and agendas.

Participants of the seminar actively contributed to the preparation of the conference by preparing a press release and facilitating roundtable discussions. The conference started with an unconventional opening, when three Roma young activist presented their press release including their recommendations to the post 2020 EU Framework in three languages: English, Hungarian and Romani.

In his opening speech, Bálint Molnár, deputy director of the European Youth Centre Budapest, emphasized that the Council of Europe puts a great importance to support joint programs between Roma and non-Roma young people. Lilla Nedeczky, representative of the Hungarian National Youth Council presented the program of the council and its goals for 2019, in which the involvement of NGOs working in Roma communities will play a key role.

In the framework of the presentation of the international Roma Monitoring Report Project of National Integration Strategies, Bernard Rorke’s speech emphasized that one of the main conclusions of the monitoring reports is that the term of antigypsyism is still rarely used in the Strategies, which means that the NRIS’ are ignoring the phenomenon of structural repression. Henriett Dinók, director of Romaversitas Foundation Hungary, which organisation contributed to the Hungarian report, mentioned the obstacles of young Roma in the field of higher education and networking with each other. She also identified the high level of discrimination in the labour market and education as key problems for Roma young people.

After the thought-provoking presentations, the conference continued in two roundtable discussions. The roundtable about NRIS Monitoring report conclusions continued with interactive discussion with the participants, who prepared questions and comments after the presentations. Those participants who were also contributors to the national NRIS Monitoring Report in their country shared their experience regarding the process and the outcomes – which also reflected on the different structures of cooperation among the organisations and national institutions in each country. The participants concluded that the youth specific issues are missing from both the NRIS and the Monitoring Report aspects as well – such as mobility opportunities, national and international participation in professional work, higher education and labour market situation.

We believe that the wider understanding of the mechanisms of antigypsyism can effectively raise awareness regarding the situation of Roma youth and tackling antigypsyism, therefore the other roundtable discussion reflected on the Challenges of Placing the Concept of Antigypsyism to Institutional Agendas. We invited speakers to this table, who have experience in the field of youth work, activism and advocacy processes.

Vicente Rodriguez, from ternYpe International Roma Youth Network mentioned that the current phrase of Roma inclusion used in international and national discourse does not address the structural oppression which is antigypsyism. Since 2010, a group of 15 Roma activists have successfully included antigypsyism in European structures. Now EU institutions talk about antigypsyism rather than Roma inclusion. He emphasized that this progress is rather relevant in the Brussels bubble not in the grassroot communities.

The invited guests talked about their own lives and how they had to fight for their successes in the education system against the atmosphere of antigypsyism. Their own experiences have highlighted the role of consciousness: they were able to move on in more situations and find new solutions with the support of their family who had knowledge about discrimination and realized it. Recognition of this is crucial, and the widespread knowledge about the mechanism of antigypsyism is essential. Roland Ferkovics, advocacy officer of Roma Education Fund stressed that antigypsyism is the core of the Roma segregation in education.

The discussants were very negative about how non-Roma will be able to understand and do anything against antigypsyism. This pointed out the importance of seminars and non-educational programs for Roma and non-Roma young people, where they can learn about antigypsyism together to be able to tackle it in their own communities.

The conclusion of the intensive and interactive roundtable discussion and of the conference itself was that we can say that there is a step forward compared to the situation of a few years ago:  No one understood what antigypsyism meant before – now there is a discussion about it and there is opportunity to talk about structural repression. The next steps are to develop awareness about antigypsyism on local and community level – including the possibilities of this conference.