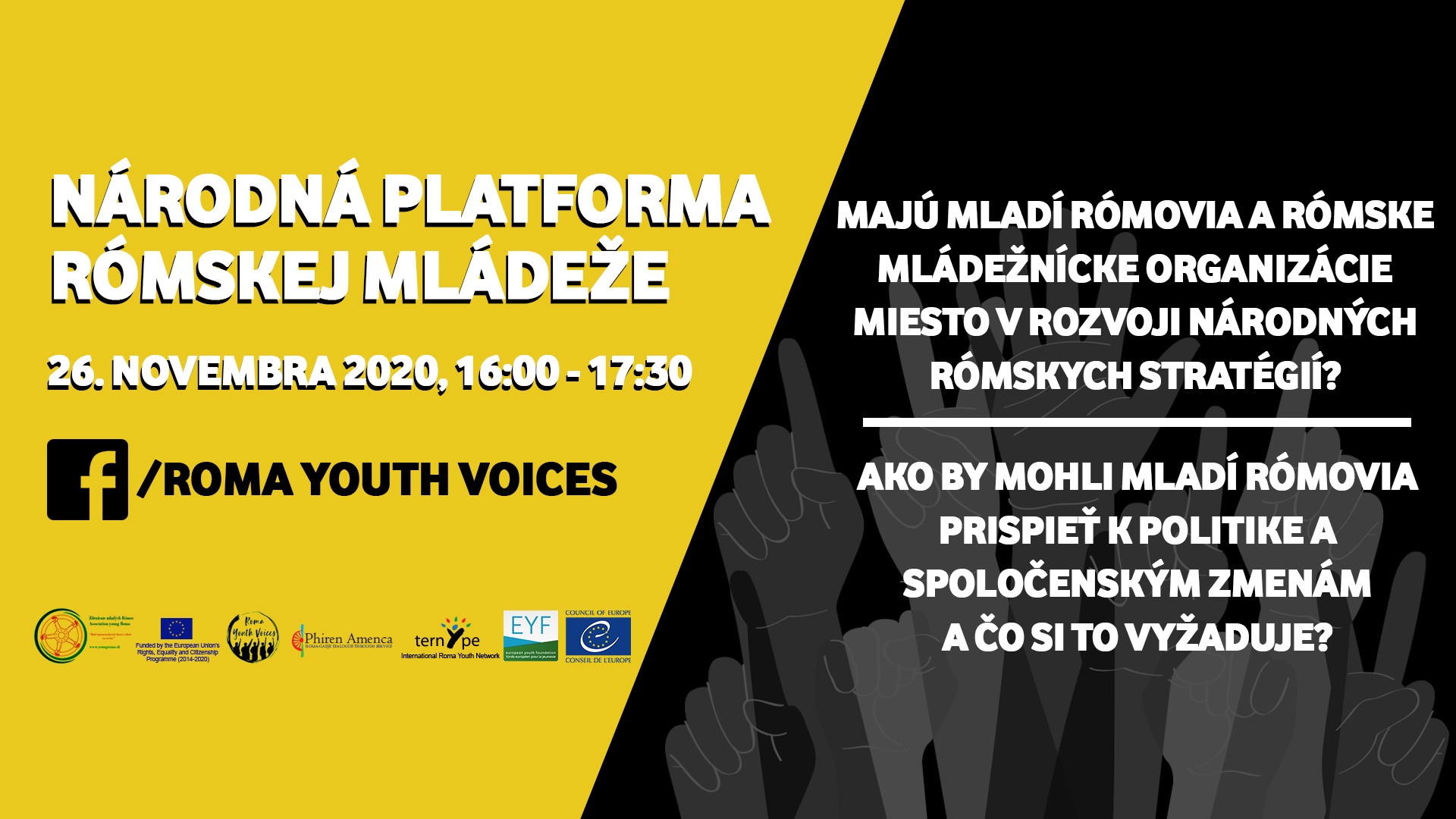 How could young Roma contribute to social change? What does it require? On 26 November 2020, the Slovak National Platform for Roma youth tried to find an answer to these questions in an online discussion. The event was organized in partnership with Association of Young Roma Slovakia and it was attended by Andrea Bučková – Plenipotentiary of the Government of the Slovak Republic for Roma Communities; Peter Kupec, Director of the Erasmus + National Agency and the European Solidarity Corps; Marcela Adamová from the European Commission; Danica Ficová from the Slovak Youth Council; Edita Rigová, Researcher focusing on marginalized groups and Roma youth, as well as by many young Roma online.

“Education is both necessity and the key of change that can significantly affect not only social life, but also the development of the country’s economy or social system. Therefore the voices of young Roma leaders, experts and organizations working in Roma communities should also be heard in the search for solutions for a better education system” said Juraj Vozar from Association of Young Roma.
Juraj Vozar opened the discussion with the findings of the “Roma Youth: Challenges and Perspectives” survey conducted as part of the Roma Youth Voices project. He examined the level of participation of Roma youth and what are the possibilities and barriers to participation. The survey revealed that young Roma have been shown to be most concerned about racism and discrimination, while their second most widespread concern is access to education. Almost every young Roma has experienced verbal discrimination, offensive and degrading gestures and hostile behaviour because of their background. As many as 68 % of Roma students have experienced racism at school or university. 41 % of Roma students experienced exclusion from the classroom due to their background. The main motivation for civic engagement is the opportunity to be part of change.

“Already from 2014, the special calls for National Roma Contact Points from EC DG Justice, have helped us to be able to focus on the Roma youth development. We have organised series of various educational youth seminars. Good example was the so-called Workshops for future, where participants organised own small-scale round tables, after the workshops. Currently our office, as National Roma Contact Point applied for the DG Justice call for national Roma platforms, where one of our specific target groups is Roma youth. During the creation of national action plans in the last (now finishing) programme period, the voice of Roma youth was missing. At the current time of preparing the new strategy and action plans, one of the main 4 criteria is the need to focus specifically on Roma youth. We plan to address this point in communication with Ministerial stakeholders. I truly hope that young Roma men and women will be actively engaged and close the existing gap of participation” the Slovak Plenipotentiary for Roma communities, Ms Buckova stated.

Experts agreed that the biggest challenges for Roma participation are low awareness, young people’s self-confidence, greater closeness and addressability of various initiatives.
As Peter Kupec pointed out, low civic participation is not just a problem for young people from minorities. One of the ways this could be improved is the development of civic competences. According to the Slovak research initiative “It makes sense”, there is not enough emphasis on civic competences development in Slovak primary and secondary schools.

In factual knowledge, Slovak students achieved above-average results years ago compared to their peers in Europe. However, more attention would need to be paid to ethical decision-making and the development of public participation skills. The research of the Slovak Youth Council points to first-time voters who lean towards extremist and populist views.

According to Marcela Adamová, another skill that young people (Roma and non-Roma) should strengthen is the ability to work together. This is one of the key competencies for the 21st century. At the same time working together is an important part of civic participation, organization of petitions, the formation of coalitions, active participation in organizations and other similar forms of participation.

However, young Roma face other barriers. “These are fears and anxieties of discrimination, comparisons with the majority society, prejudices and stereotypes,” added Danica Ficová at the end of the discussion.

The Discussion brought specific outcomes. Peter Kupec of National Agency had agreed on a follow-up meeting on ways to simplify the access to Erasmus+ programs for Roma youth from marginalised communities. Plenipotentiary Buckova has presented a job opportunity at her office, for a young Roma man/woman to become the “Plenipotentiary ambassador” and represent Slovakia and the Office internationally. Danka Ficova had approached AYR with the cooperation proposal on the research project she is currently running: to provide professional consultations on youth work with Roma.

Feedbacks from the participating audience and the speakers both had appeared to be overly-positive and reassured us of the right direction and importance of the research as well as the Roma Youth Voices project.

The online event took place as part of the Roma Youth Voices project and as part of the Annual Work Plan of Phiren Amenca, co-funded by the European Youth Foundations and implemented in partnership with Association of Young Roma, from Slovakia.