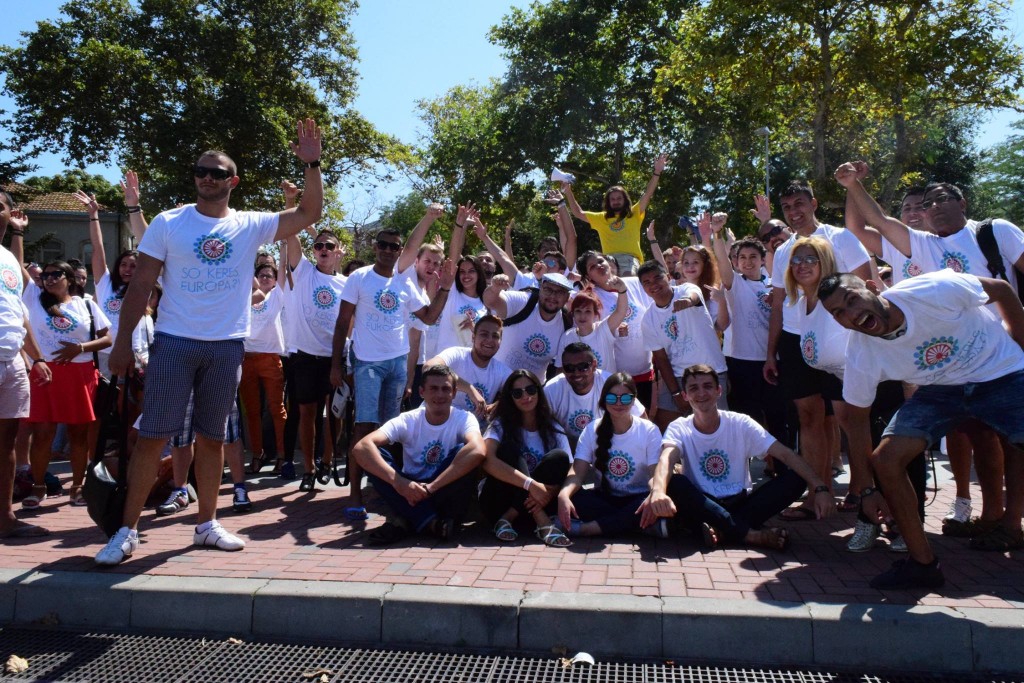 Phiren Amenca International Network and its partners brought together 150 young Roma and non-Roma people from all over Europe to the European Youth Capital Varna, Bulgaria between August 24-30. 2017 to raise their voices against racism and discrimination towards Roma people in Europe.

After a general input on the situation of Roma in Bulgaria and on forced evictions in Europe, participants could choose from the following thematic workshops and join one of it for the rest of the week and create a 48 hours action around its topic:

I. Understand, denounce and fight forced evictions of Roma across Europe

Governments across Europe, in blunt violation of international and regional human rights standards, continue to carry out forced evictions, leaving thousands of Romani adults and children in extremely vulnerable situations, rendering them homeless and without a roof over their head, or placing them in highly inadequate alternatives, at the margins of cities, often in locations dangerous to their health or in segregated camps.

The workshop on forced evictions across Europe was lead by Amnesty International and intended to raise awareness among the participants of the event about this alarming situation. The workshop also intended to empower the young activists who have shown interest on this topic by giving them the theoretical knowledge and concrete tools for strategic campaigning in order to be able to understand and challenge the ongoing human rights violations. The workshop aimed to encourage the activists to use what they have learnt and through a 48 hours action they designed and implemented, to find new ways to commit against forced evictions, to come up with new creative ways to campaign and mobilize for against forced evictions of Roma in Europe.  During the 48hours action the group built an alternative Tourism office proposing a tour of locations with insides of the situation of Roma and the face evictions they risked or experienced. The participants did great work and succeeded to build the office tourism, the interior of a “Roma home” and have created materials like amazing postcards showing the “double faces” of the touristic cities to bring awareness among the tourists about the real consequences of discriminatory and exclusionary policies implemented by these cities on the lives of peoples.

During their 48hours action the group created a video and a photo exhibition – which was presented in the public event of the last day as well – with the aim to challenge stereotypes and preconceptions.

You can watch the video of the group this link below:

III. Romani Resistance – Then and Now

The work of the group started with gathering some information about the History of the Romani Resistance Day, i.e. the events of May 16, 1944 in the Auschwitz-Birkenau concentration camp. Most participants did not have any information, so they got short texts describing the events form to different perspectives then participants processed the „resistance-stories” of heroes of the Roma Resistance during WW2 (http://rromani-resistance.com/heroes), they familiarized with different theoretical concepts of resistance and learned more about  different contemporary instances when Roma performed resistance, such as actions  of Romani women and LGBTQIA people resisting oppression within the Roma community, to think more broadly about acts of resistance.

During the 48hours actions the group created a video in which they share contemporary examples of violations of the human rights of Roma from their countries and asked people on the streets of Varna how they would react if those cases occurred to them; and share a common message in different languages. The video was screened at the final festival.

You can watch the video of the group this link below:

IV. Lens wide open: Photography as a means of repression and resistance

Photography has always played a crucial role in history both as a means of repression and in resistance. One of the first wider uses have been police photos to register ethnic minorities, for example in the “carnet anthropométrique” in France. At the same time, photography can and has been used as a means of emancipation, self-determination and resistance (for example Matéo Maximoff making aireal photos of community evangelical gatherings). In this workshop, participants looked into spotlights of history, where it has played a role in the persecution, repression, but also resistance of Roma.

During the 48 hours action participants created an installation based on their own photos related to challenging antigypsyism.

During this workshop Pop culture, history and philosophy were the fundamental components with information and debates on Morality, antigypsyism, Roma reality and how to challenge the status quo. As their 48 hours action participants created an exhibition which they presented during the other groups presentations during the public event on the last day and raised important questions related to facts about Roma history and Roma heroes, for instance.

Participants worked together with a professional actress and used the method “Forum Theater*” and based on the situations they tackled and discussions they had, during their 48 hours actions they created a theatre scene about school segregation.

*In the Forum Theater, a play or scene is shown several times. During the replay, any member of the audience (‘spect-actor’) is allowed to shout ‘Stop!’, step forward and take the place of one of the oppressed characters, showing how they could change the situation to enable a different outcome. Several alternatives may be explored by different spect-actors. The other actors remain in character, improvising their responses. The strategy enables participants to try out courses of action which could be applicable to their everyday lives. The method will be used to share personal stories on discrimination, analyze behaviors and to propose alternative solutions to situations of oppression.

During this workshop participants learnt traditional dances and songs of Roma people made of influences got by the different countries met during the travel from India to Europe, with the aim to send messages about the beauty and the richness of Roma culture, increasing its value, and the importance of a multicultural society where differences are accepted. During their 48 hours action the groups wrote a song and created a performance about Human Rights.

Besides the learning possibilities about different topics, the event created space for activism and dialogue among Roma and non-Roma young people and youth organizations. It allowed the participants to share their local realities, to discuss about the needs and challenges of Roma youth and to reflect about the common cause and motivation for youth activism, which was summarized in a Roma Youth Manifest throughout the week:

“We believe in equal rights for all people. There cannot be equality if there is no real participation and if we do not name and fight antigypsyism and discrimination. Governments and society are responsible to respect and treat Roma as equal citizens.”

The manifest and our massages and outcomes got a big visibility in a closing public event. As an honour, Raymond Gureme, 91 years old Holocaust survivor from France also joined our event with his daughter, to share his story with the young generation and to share his passion and motivation to stay active in order to challenge antigypsyism.

Phiren Amenca organized its first “So keres, Europa?! event in 2015 in Cluj-Napoca, Romania – a European Youth Capital that year – and assigned a big solidarity march to raise awareness about a case which occurred on the 17th of December 2010 in Cluj-Napoca, where 76 families were forcibly evicted without adequate notice by local authorities from Coastei Street in the center of the city. No consultation with the affected families took place prior to the eviction and no feasible alternatives to the eviction were explored. Forty of these families were relocated to inadequate housing conditions on the outskirts of the city (in Pata Rat), close to the city’s garbage dump and a former chemical waste dump, while the remaining families were left without alternative housing.

The project was co-funded by the European Youth Foundation, the Erasmus+ program of the European Commission and the Foundation “Remembrance, Responsibility and Future” (EVZ).