Florian at Romanistan, festival of Roma music and culture!

I am Florian and I am a French EVS volunteer for 9 months in Barcelona. I am doing my volunteering at the Federation of Roma Associations of Catalonia, which gives support to all local Roma Associations, defends and promotes the rights and culture of the Roma people.

I was not very aware of Roma people and culture until coming to Barcelona. Although in Paris, as in many places around Europe, they are also many Roma, I had little contact with Roma people. So since I am here I got to know a lot about the local Roma community. On my arrival I had the opportunity to attend an introductory Romani language course which is for Roma, as the Spanish Roma don’t talk Romani anymore because for many years it was forbidden by law. Roma here talk Spanish and Catalan, like the rest of the population, both languages I also attended courses and that I learned quickly, as they are Romance languages as French, and that I have to use them in my everyday work and life.

Most of my work is office work. I maintain the website, gather information about cultural events and relevant news to the Roma community, and spread it. I have also been active in organizing a Roma music and culture Festival “Romanistan”, which was held on 30th of June 2012 in a big park in Barcelona. This was a very exciting experience and Roma artists from various places around Spain and Europe attended the festival. During Summer I was doing computer workshops with kids in a local Gypsy Association. Among other things, we were doing a blog where they could write about themselves and the activities we had together, like playing football, visiting the zoo, going to the park, visiting the parliament, going to the stadium,… It was very nice. 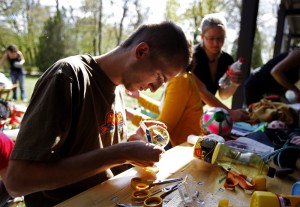 In spring 2012 I had the opportunity to participate in a Phiren Amenca seminar in Budapest where I met other volunteers working in Roma Associations around Europe. It was very interesting to learn from the experiences of the other volunteers and to get to know a little bit about the reality of the Roma community in Hungary. Promoting European awareness helps to understand how Roma communities around Europe are so diverse but still belong to one people.