Challenges of Young People in India- Insights from a Volunteer 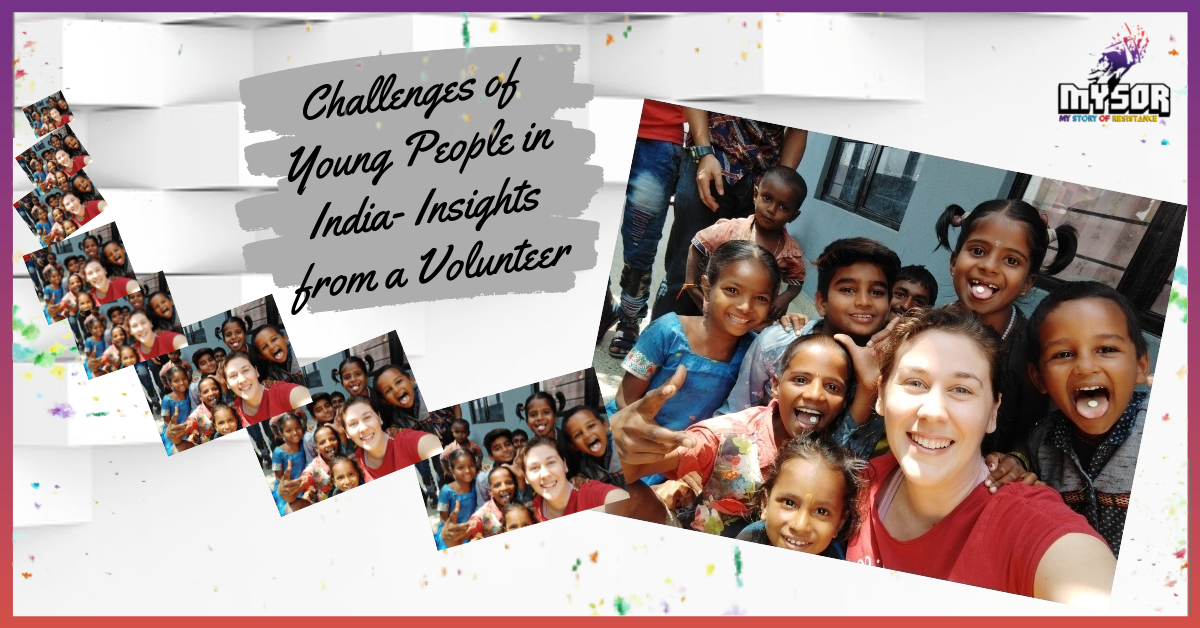 Article written by Zsuzsa from Hungary volunteering at the Student Christian Movement on India in Bangalore, summarizing her experiences and opinion.

In India many new dimensions opened up in front of me. Without question it is a new world, different than I have ever experienced before. As I had the chance to interact with many local people and even little kids, I could look into their lives a tiny bit, and got to know their goals, their dreams, and their problems, difficulties as well. All of us, every human being in this world wants to be accepted, wants to feel loved, seen and understood by the people around us, but all of us are being judged by others, meet discrimination; and got hurt in bias-based societies just in different forms, different ways.

The previous months I met many different problems; discrimination, difficulties, some rooted in old traditions, some in new social habits, some in unbearable poverty, and some of course rooted in hate, misunderstanding and fear. However, the main problems, what almost everyone was mentioning to me were caste-, and gender-based.

A group of young people I had the chance to speak with (between 18 and 25 years) sometimes feel trapped in their lives. As one of them said, the question of caste comes up in every official and formal level. They asked him about it at the university, and later, when he applied for a job as well; and because of his caste he always had to start from a worse position than others. Or a girl mentioned caste-based discrimination even in a sport team, which she could not join because of her origin. Since caste is birth-based, seemingly there is no easy way out of these kinds of rejections. However, friends and families are always ready to get each other’s back, and there is no caste in friendships, as one of them looked at her friend and said “We are childhood friends, but I still have no idea about her caste. And I really don’t care!”

The other difficulty sometimes causes even harder feelings, since it is rooted in tradition; therefore puts the person against the family and even the whole neighborhood, who are judging. The Indian society is very much patriarchal, with very strong “social norms”, according to which people should get married as soon as possible, women should be housewives and the men should earn the daily bread. Until 25 years old, at very latest 30, most of the families try to arrange a wedding for their daughters, who sometimes cannot even speak to the boy before the wedding, and after that must leave their families behind and move to the husband (almost never the opposite way). Even nowadays it is more common for young people to marry a person out of their choice. And after the arranged wedding, the women have no other choice than staying at home, taking care of the house and the family. Dreams like having a career, travelling, or having an independent life just stay dreams, or the young lady must face with constant comments, judgments and gossips from everyone.

The younger girls said they were afraid of this procedure and didn’t want arranged marriage with a stranger, neither to give up their dreams, like seeing the world and travel. One of them even said to me “I wish I could have your life”, which sentence very much sticked with me. Those young ladies, who are around 30 years old, but have refused to get married yet told me that they were more than tired of the constant pressure from the family, the aunties, the gossips of the neighbors, and many of their friends agreed to get married just to end this kind of bullying.

Of course, love marriage can happen too, and is happening, but much less, and the families go against those couples who don’t have the same language, religion and aren’t part of the same caste.

Finally, I would mention a very serious obstacle young people can face, and is pretty common in the Indian society. It is the lack of socialization and education, which is rooted in poverty. Many families’ only income is from agriculture, and when there is no work on the fields they go to the nearest city to do any kind of job from early morning till late night. I had the chance to spend some time with these families’ kids. They live in tents on the outskirts of the city and spend most of their days alone, wandering around the streets and taking care of the smaller ones. They don’t go to day-care, kindergarten, or school, and by the time they become teenagers, they are so free-spirited, that they cannot spend a whole day in one place, and concentrate on one task, neither in school, nor at a workplace. There are some organizations who try to help, feed and educate them, but many of these young people just get swallowed by the slum, become drug-addicts, steal to survive, and lose even the hope for a better life.

Zsuzsa is a Hungarian Phiren Amenca volunteer in India, hosted by the Student Christian Movement of India, within the Erasmus+ KA2 Capacity building for Youth project “My Story of Resistance- from exclusion to active participation”.