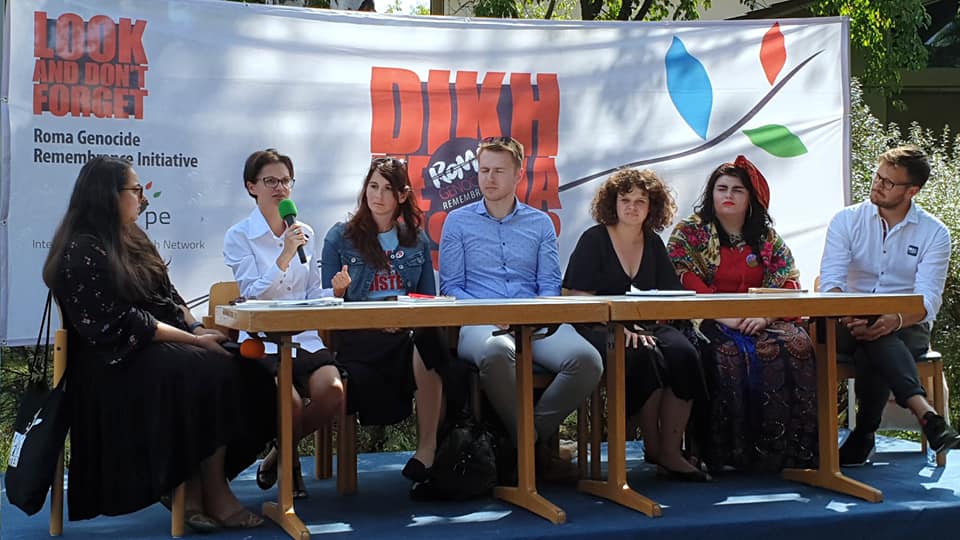 Thousands of people paid the tribute to the victims of the Roma Holocaust on the 2nd of August at the official commemoration ceremony in Auschwitz-Birkenau. On the 2nd August 1944 in the so-called “Gypsy camp” at Auschwitz-Birkenau concentration camp, around 3000-4000 Roma were exterminated during one single evening. This date is commemorated as the Roma Holocaust Memorial Day.

Right after the commemoration, ternYpe International Roma Youth Network gathered hundreds of young Roma and non-Roma people from all over the world at the International Youth Meeting Centre in Auschwitz. The aim of the gathering was to reflect on the importance of Remembrance of the Roma Holocaust but also to find ways how different youth groups and youth organizations can build up alliances and support each other in this important role and work.

At a roundtable discussion Marietta Herfort, Director of the Phiren Amenca International Network, Alina Bricman, President of European Union of Jewish Students (EUJS), Pia Šlogar, Vice-President of the Youth of European Nationalities (YEN), Benjamin Günther, Board Member of the European Youth Forum, , Matic Germovšek member of the Advisory Council of the Council of Europe and Lois Brookes-Jones on behalf of the Dikh He Na Bister movement have been invited.

The moderator, Irina Spataru, among many interesting questions asked the representatives why it is important for them and for their organizations and institutions to remember the Roma Holocaust and how can we build up alliances across our communities. Each of the guest speakers in their responses emphasized the importance of commemorating 2 August as International Day of Remembrance of the Roma Holocaust by Roma youth organizations and movements but not just in the formal concentration camp in Auschwitz-Birkenau but they have mentioned the importance of the commemorations on local and national levels, which are often lead by Roma youth initiatives as well. They all pointed out that remembrance is also a tool for young people to fight for human rights and against discrimination and remembrance education is more important in Europe today when we see the growth of antigypsyism, antisemitism, hate speech and hate crime.

Alina Bricman from EUJS shared that young Jewish people show solidarity through these events and activities. She stated that coalitions and alliances are important to fight for equality for all minorities in Europe.

Another important point of the discussion was that we are, no matter to what minorities we belong to, the last generation who has a genuine link with the survivors, so it is our role to keep their memory alive.

The written “Statement by First Vice-President Timmermans and Commissioner Jourová” is as follows: “75 years have passed, but we do not forget. The memory of the horrors of the past must inspire us all to stand up for the values we believe in. To see every one of our fellow citizens as themselves, as individuals, and to wonder how we would feel if we were them. That is the lesson we have learned from our parents and grand-parents who experienced the darkest of times. So together with our Member States and local communities, we will continue to fight against all forms of racism and ethnic discrimination, here in Europe and worldwide”.

The Dikh He Na Bister movement is an important element in this work as every year it brings together Holocaust survivors and young people to talk and get to know their struggles and stories. At the closing part of that afternoon, participants could have personal moments in small groups with Mr. Raymond Gurême (France), Mr. Ivan Bilashchenko (Ukrainian), Ms. Krystyna Gil (Polish) Roma Holocaust survivors.

The meeting was part of the DIKH HE NA BISTER (“Look and don’t forget” in Romani) – the Roma Genocide Remembrance Initiative, which did bring together 500 young Roma and non-Roma from over 25 countries on the occasion of the European Roma Holocaust Memorial Day to advance remembrance, recognition and education about the Roma Genocide. The 6-days lasting event (July 29 – August 4.) in Krakow and Auschwitz was a space of learning about the past, as well as of reflection about the role of young people in Holocaust remembrance. DIKH HE NA BISTER empowers young people in their struggle for justice and equality, and against antigypsyism and all forms of racism and nationalism in Europe today. DIKH HE NA BISTER was founded by ternYpe International Roma Youth Network and its member and partner organizations in 2010; it was co-organized with the Documentation and Cultural Centre of German Sinti and Roma and in cooperation with the Council of Europe and the event itself was financed through the Roma Youth Voices Project, funded by the European Union’s Rights, Equality and Citizenship Programme (2014-2020).

More detailed reflection by a representative of YEN about the whole-week event can be found there: http://www.yeni.org/2019/09/25/impressions-from-krakow-dikh-he-na-bister/

The full statement of Commissioner Jourova can be found online at: https://europa.eu/rapid/press-release_STATEMENT-19-4869_en.htm