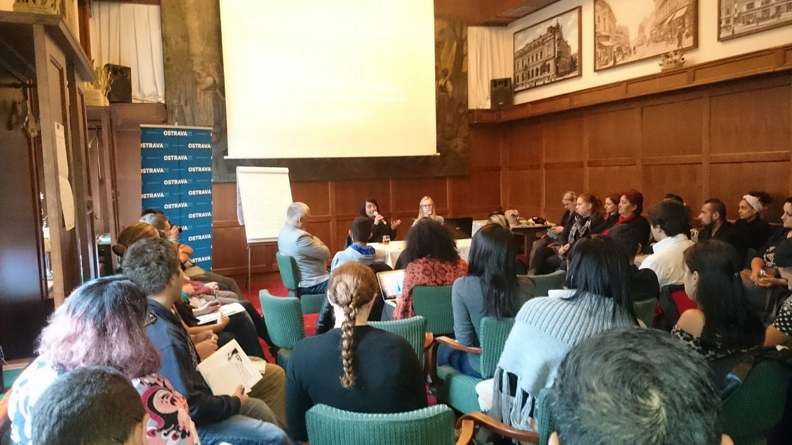 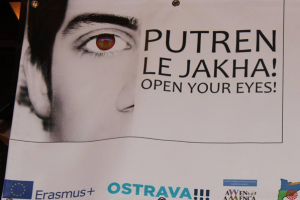 During the second week of October 2016, Putren Le Jakha! was held in Ostrava, Czech Republic. The third annual conference on antigypsyism brought together 42 youth participants representing the countries of Austria, the Czech Republic, Hungary, Romania, Slovakia, and Spain. Throughout the conference, participants learned about topics such as racism, discrimination and antigypsyism. They also learned new skills which will enable them to fight discrimination against Roma.

Dennis Brink, a volunteer in the Phiren Amenca coordination office for 2016-2017, shares his reflections and impressions as a participant in Putren le Jakha 2016:

Throughout the week-long conference, participants engaged in a number of enriching activities and experiences. The participants engaged in many different workshops, and activities. One of the highlighted activities included the participants’ involvement in the role-play of a European Court of Human Rights case that myself and Phiren Amenca voluntary service coordinator Anna Daroczi facilitated. During the mock court, we split the participants into several groups, and gave each group specific tasks representing the different actors of the court proceedings. We gave them roles relating to a case that took place within Croatia. The case related to attacks inflicted upon a man of Roma origin, by a group on the grounds of hate speech. After giving the groups their tasks, we gave them an allotted period of time to create their performance pieces. The activity went really well, the participants were extremely engaged and had a lot to say during an enlightened conversation which we held after the end of the activity. We led a discussion relating to the importance of partnering the powers of law and raising awareness to discriminatory practices geared towards the Roma community. 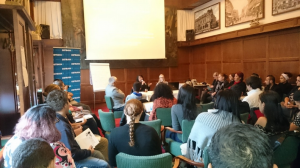 Participants hold a mock trial based on an actual European Court of Human Rights case.

Although the activity went really well, it still had a couple of difficult challenges which we had to work through. To begin with, the case was a very difficult and confusing one to work with. The ideas in the case relating to hate speech and discrimination were very difficult but important topics to discuss. The facts in the case were not very clear, which made it difficult to interpret within the groups’ assigned tasks. One of the most entertaining parts of the activity was when the press groups went up to show what they did during the activity. They created fake press reports which were really fun and entertaining to watch.

Participants were also engaged in a social media campaign. During this campaign the participants were split into small groups and dispersed throughout Ostrava talking to the local residents, while raising awareness about antigypsyism, as well as the discrimination against Roma. We also participated in a public flash mob performance.

Throughout the week, Bogdan Burdusel, a participant representing Spain, had helped lead a flash mob workshop. During this workshop, the members rehearsed and practiced a flash mob routine. During one of the last days of the conference, Bogdan walked all of us through how to perform the flash mob. For me, participating in the flash mob was definitely an interesting experience. After rehearsing the flash mob, we all walked down to a public square in Ostrava to perform the flash mob. I was really excited to be part of this flash mob, when the music started playing we all jumped into lines, dancing the day away. As some of our group held up signs chanting “Putren Le Jahka!”, the crowd grew around the square. It truly was a powerful and fun way of spreading awareness for antigypsyism. 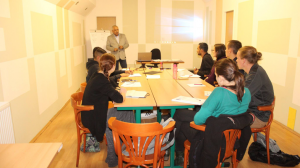 I had the unique opportunity of participating in a superhero workshop. It was run by a Roma activist named Sami. During this workshop we talked about how the Roma’s image has been actively changed throughout the comic book universe. In particular, as a group we looked at Roma characters within the Marvel Universe. We created posters discussing the characters of Magneto, the Scarlet Witch, and Quicksilver. My small group created a poster talking about the twins of Quick Silver and Scarlet Witch. We discussed their origins being members of a traveling Roma community, and how people tried to kill them because they were afraid of their powers. This activity was really interesting to me, because it was fascinating to understand how stereotypes of Roma are integrated within pop culture and many other parts of society. It has provided me with a better perspective on how to combat the general Roma stereotypes. The combination of all of the participants’ efforts led to the creation of a public event upon the last day of the conference, during which there were performances by the local Roma community; as well as a small press conference held as a means of engaging the public press.

Overall, the third annual Putren Le Jahka conference continued building upon the already established work against antigypsyism. The participants’ and organizers’ hard work throughout the week has created a nicer picture for the near future. A future, which is a better tomorrow, bringing together separate communities of people, acting in solidarity to fight against discrimination in its entirety. 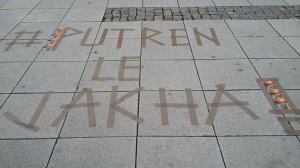 Through a social media marathon, participants spread the word about the conference to the local community.

For me this conference was a unique learning experience to better understand the problems which face the Roma community. Before participating in this conference, I had only just begun my responsibilities for Phiren Amenca as an American volunteer. This conference was extremely important, because it allowed for me to engage in very intense and challenging issues facing the Roma. I have discovered how I am able to use my background in law and politics to become an advocate for Roma. An in-depth discussion about the definition of antigypsyism and a better understanding of the different capacities of discrimination, have allowed for a growth in learning. I hope that Putren Le Jahka has only merely begun its continued yearly conferences. For its ability to press for solutions and change to challenges facing Roma, is crucial to the future which we want to live in.

This project was supported by the European Youth Foundation of the Council of Europe.