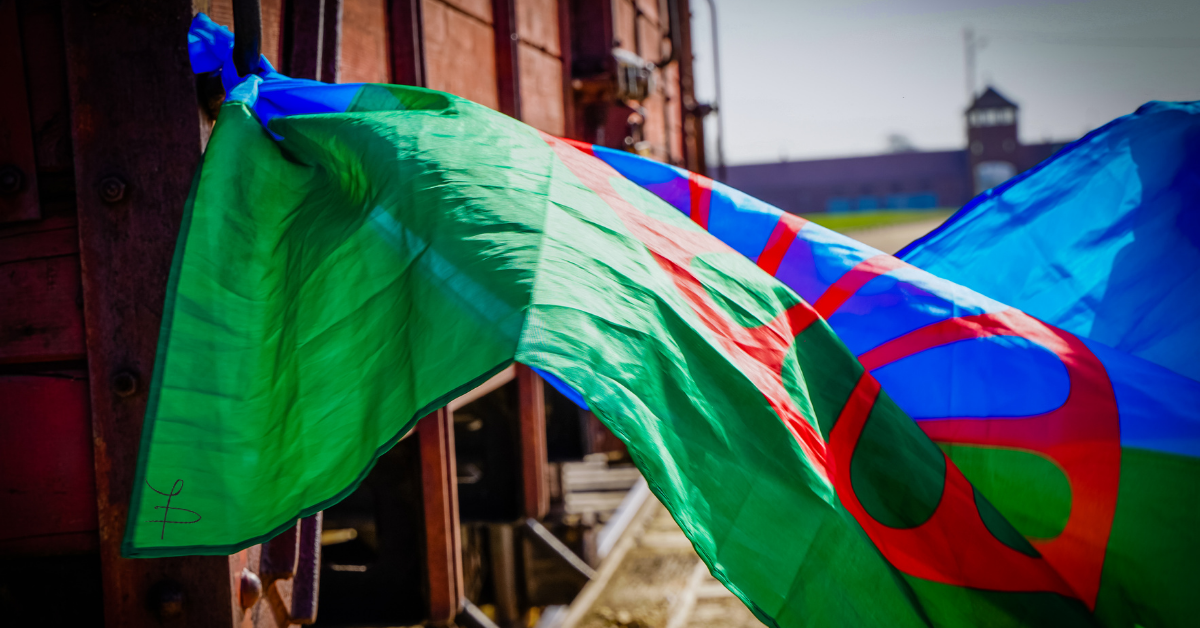 The first of the series of seminars dedicated to the Roma Holocaust took place in the International Youth Meeting Center in the town of Oświęcim, Poland between 11 and 16 April 2022. More than 40 young people from all around Europe participated in the seminar devoted to the Roma Holocaust and Romani Resistance and visited the former concentration camps of Auschwitz-Birkenau.

On the first day of the seminar the participants got to know each other, shared their expectations, fears and contributions. The organizing team of Phiren Amenca conducted sessions dedicated to getting to know the stories of individuals and historical facts connected to the Roma persecutions by the Nazi regime during World War II and ‘opened’ the topic to the participants by highlighting that the persecution of the Roma had started much earlier than the Nazi regime. Participants leant about Romani resistance day and about different figures of resistance such as Johann Trollmann-Rukeli, Raymond Gureme, Alfreda Markowska and many more.

In the afternoon Ms Ewelina Mysliwiecka from the Auschwitz State Museum led a workshop titled “Steps that led to Auschwitz” asking participants to understand deeper and grasp better the historical and political developments before 1941. Young people mentioned historical events such as the Kristallnacht in 1938 or adoption of the Nurnberg Laws in 1935 but traced the roots of racism back to colonization and imperialism and the birth of “racial theory” centuries earlier.

On the second day of the seminar the participants had a guided tour at the Auschwitz Museum. The majority of the participants saw the evidence of the horrors committed on the territory of the Auschwitz former Nazi concentration and extermination camp for the very first time. In the afternoon two special workshops were held: one dedicated to the Roma and Sinti Extermination in block 13 where the permanent exhibition is prepared by the Central Council of Sinti and Roma, and one reflection-session in block 27 which exhibits the persecutions of European Jews by the Nazi regime prepared by the Jad Vashem Institute in Jerusalem.

Guided by the staff of the Museum, participants had to read, learn, and present different facts related to the Roma Holocaust putting together a general picture of the history of the persecution of Roma and Sinti; and had the chance to discuss difficult topics, such as “Where was God during the Holocaust?”, or “How did ordinary people react to the persecution of Jews?”.

The third day of the program was dedicated to the visiting of the Auschwitz II – Birkenau site where participants got to know more about the life of the Roma and the Sinti in the so-called “Gypsy Family Camp” (Zigeunerlager, Section BII-e), visited the ruins of Crematorium V where on the evening of 2nd August more than 4300 Roma and Sinti lost their lives (the extermination of the Zigeunerlager), and held a special Roma youth-led commemoration prepared by the participants themselves. The participants laid flowers, recited poems and sang “Aušvicate hi kher baro“.

On the last program day of the seminar the participants had to present stories describing contemporary antigypsyism from their own realities using as a method the theater. After that there was a session dedicated to follow-up plans, becoming multipliers, and organizing Roma Holocaust Remembrance events in our own cities, towns and villages. Consequently, participants volunteered to recording video messages calling for equality, peace, and non-discrimination. In the end of the day participants visited the Roma History and Culture Museum in the town of Oświęcim where they remained impressed by the great history and pieces of art exhibited.

The second of the series of seminars dedicated to Roma Holocaust will take place around 2 August 2022 in Germany focusing on history of the Buchenwald Nazi concentration camp.