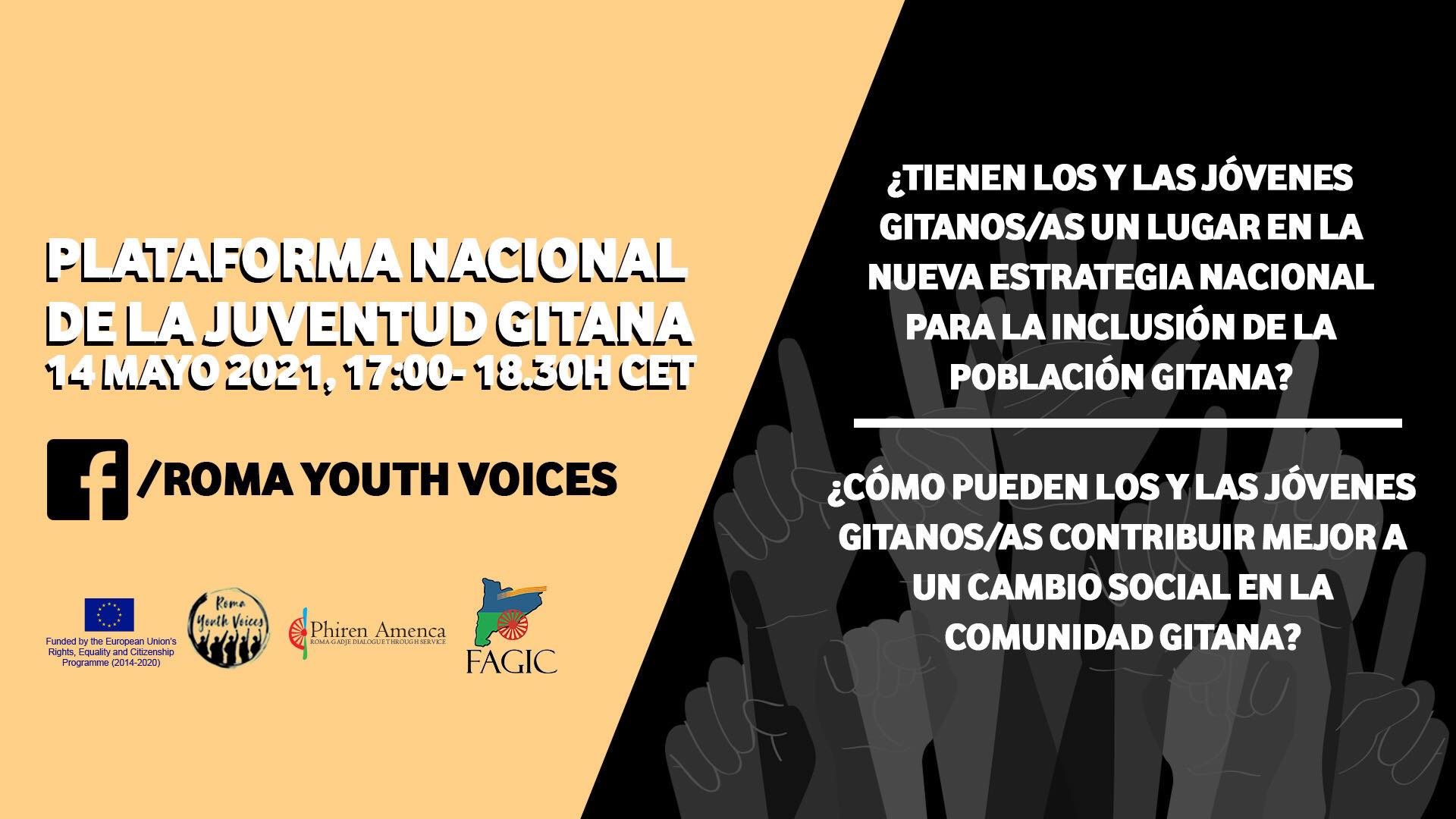 The Federation of Roma Associations from Catalonia – FAGiC, in collaboration with the Phiren Amenca International Network, organized a Spanish Roma Youth Platform. The meeting took place on 14 May 2021 in an online format. The Youth Platform was focused on ensuring the Roma youth voices and participation of young Spanish Roma in the process of designing the updated Spanish Strategy for Roma inclusion.

The meeting continued with a discussion between four Roma youngsters from four different regions of Spain: Rafael Torosio Vargas – Extremadura, Palmira Dual Jiménez – Basque Country, Lorena Jiménez Jiménez – Madrid, and Paco Vargas Porras – Catalonia, and the National Director of Diverse Families and Social Services who is also the responsible person for the National Roma Contact Point, and the design of the new Strategy for Roma Inclusion, Ms Patricia Bezunartea. The conversation was focused on how to include the voice of Roma youth in the new Spanish Roma strategy.

The second panel included members of the Spanish parliament: Ismael Cortés (Unidas Podemos), Sara Giménez (Ciudadanos) and Maria Dantas (ERC). The deputies stated that on April 28 2021, the Committee on Social Rights of the Spanish Parliament approved the creation of a sub-committee on State Pact against Antigypsyism to set the priorities of the Spanish government regarding the new Strategy for the Inclusion of Roma. The creation of this sub-committee was initiated by the three Roma members of the Spanish Parliament (Ismael Cortés, Sara Giménez and Beatriz Carrillo) and Maria Dantas (from the Catalonian Republican Left Party).

As the creation of this sub-committee is a historical step and there is still scarce information on how it will work and what is going to be its role with regards to the new Strategy, Roma youngsters asked the members of the Spanish Parliament about it and how to include the voice of the youth. The MPs explained the role and the limitation of the sub-committee to the young participants: only a limited number of experts will be included in the sub-committee and their work will result in a hearing in front of the Spanish Parliament.

As an alternative, however, the deputies proposed different ways on how to include the voices of the Roma youth into the political agenda, not only in the new Strategy, but also in all European programmes targeting Youth such as: Next Generation, and the Youth Guarantee. They encouraged participants to meet with the different political parties, to create a formal or non-formal organisation to unify the voices of all Roma young people in Spain, and to work together for the common goals. These goals should be shared with all political parties, with the governments and local governments and also with the Youth State Council in order to make the voice of Roma youth heard. They offered to support them on the way, but the young Roma participants were urged to create a group in order to work together.

The meeting resulted in a better understanding of Roma youth about the participatory process in the design of the new Roma Strategy. They learnt different ways of how to participate and also how to make the voice of Roma youth heard. The young Roma participants, for now as an informal group, decided to follow-up and propose written points to the Spanish National Roma Strategy that better reflects the needs of Roma youth.

You can watch the entire meeting in Spanish here: