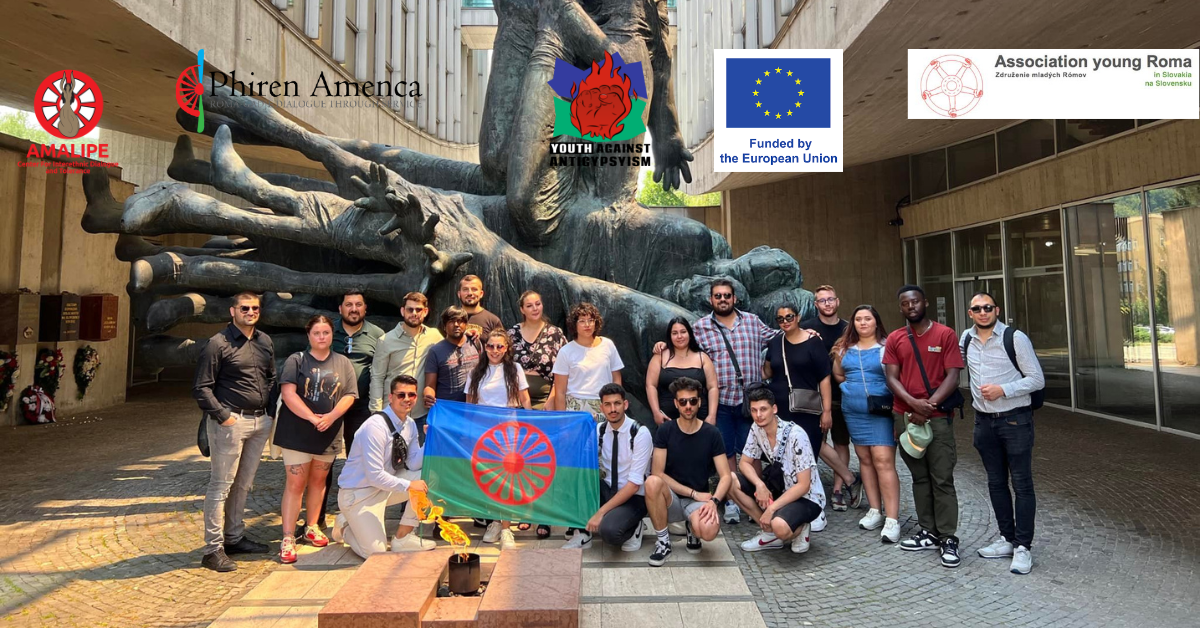 More than 20 young Roma and non-Roma took part in the “Tackling hate speech offline and online” held at the Opportunity Youth Center in Valaska, Slovakia. The training aimed at raising the capacity of young people in recognizing and reporting hate speech as an important act in combatting antigypsyism.  The event took place between 26-30 June 2022, organized by Center Amalipe and Phiren Amenca International Network under the ‘Youth Against Antigypsyism’ – YAG project funded by the Citizens, Equality, Rights and Values Programme of the European Commission.

On the second day of the training program, the participants visited the Memorial and the Museum of the Slovak National Uprising (SNP) in Banská Bystrica where they have laid wreaths and flowers and honored the memory of the Roma who died as victims of the Nazi regime in Slovakia. The commemoration ceremony was led by Juraj Vozar – Chair of the Association of Young Roma, Slovakia and Board Member of Phiren Amenca. Later on, the participants had a networking meeting with representative of the Center for Community Organizing, Banská Bystrica which took place at the local civil society hub Zahrada.

On the third day, facilitated by Claudiu Pamfil, no-hate-speech expert, participants conducted an exercise on identifying and reporting hate speech in various social media platforms: Instagram, Facebook, TikTok, Twitter, and YouTube. Since social media is an essential part of the youngsters’ life, becoming a more conscious consumer and user of these platforms are really important. During the last days they identified several cases of online hate speech, which after discussing they also reported. Moreover, the participants also learnt about different online campaigns and good practices that fight against online hate speech.

The training on tackling hate speech offline and online is the first one in a series of trainings to be conducted under the YAG-project to raise awareness about the phenomenon of antigypsyism and to capacitate young people to combat it.

This training was realized under the YAG project by Center Amalipe, Bulgaria. The YAG project (project nr. 101049207) is funded by the Citizens, Equality, Rights and Values Programme (CERV) of the DG Justice, European Commission and coordinated by the Phiren Amenca International Network, Belgium in partnership with RGDTS, Hungary and Center for Interethnic Dialogue and Tolerance Amalipe, Bulgaria. Views and opinions expressed are however those of the author(s) only and do not necessarily reflect those of the European Union or [name of the granting authority]. Neither the European Union nor the granting authority can be held responsible for them.