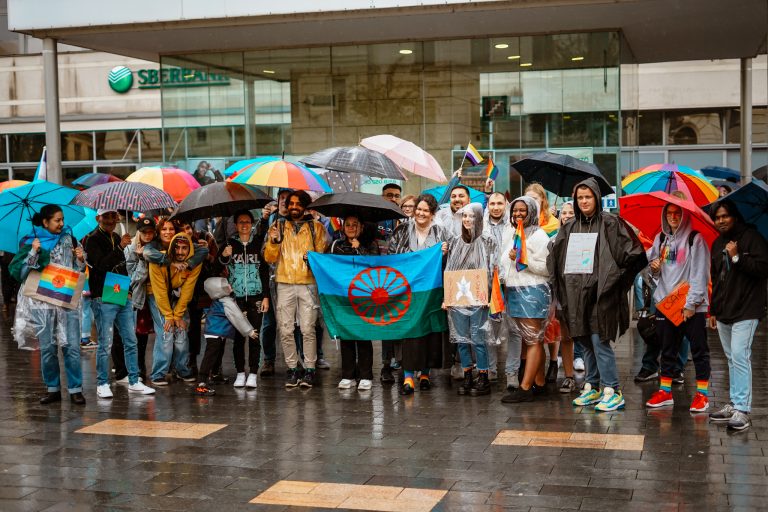 Center Amalipe and Phiren Amenca held the second of a series of trainings within the YAG project. The training took place between 14-18 September in the city of Pécs – Hungary, and was attended by more than 20 young Roma and non-Roma with the aim to increase the capacity of young people to recognize intersectional discrimination among Roma youth.

On the second day of the training program, participants discussed intersectionality and diversity among Roma youth with Fedorkó Boglárka, who created creative and debate-provoking workshops among the participants. They created their own definitions of intersectionality in groups and discussed why it is an important tool for fighting inequalities. Later, participants formed mixed groups of Romani women/Roma LGBTQ participants and allies to discuss the specific barriers people with intersectional identities face in life, and created wonderful artistic representations of their present struggles and the future they dream of.

On the third day, the participants started preparing their posters and banners for the Pride Festival. After designing different flyers and posters, an evaluation session was held before the attending the Pride in the city of Pécs. This is the second Pride organized in the city of Pécs, and the number of attendees was more than 1500 even though the meteorological conditions were very bad.

The training on Addressing Intersectional Discrimination among Roma Youth: Roma LGBT+ and Gender Equality was the second in a series of event to be held within the YAG project to raise awareness on the phenomenon of antigypsyism, and to increase the capacity of young people to fight it.

This training was realized under the YAG project by Center Amalipe, Bulgaria. The YAG project (project nr. 101049207) is funded by the Citizens, Equality, Rights and Values Programme (CERV) of the DG Justice, European Commission and coordinated by the Phiren Amenca International Network, Belgium in partnership with RGDTS, Hungary and Center for Interethnic Dialogue and Tolerance Amalipe, Bulgaria. Views and opinions expressed are however those of the author(s) only and do not necessarily reflect those of the European Union or [name of the granting authority]. Neither the European Union nor the granting authority can be held responsible for them.